Keyser Technologies leads the region in advanced flexible hose engineering. Keyser has an unrivaled reputation in the design, manufacture and supply of wide range of metal hoses in the region to suit various industries. The series of stringent tests and quality control ensures a product of the highest possible quality that meets the stringent demands of the industry today. Keyser’s metal hoses are used throughout the region for use in automotive, petrol chemical plants, power generator plants and other industrial applications.

A number of factors affect the selection of the right metal hose for the right application. 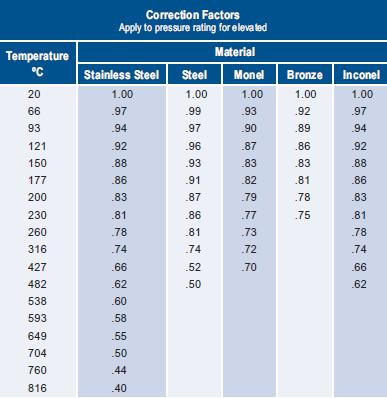 a. Maximum Working Pressure
This is the maximum operating pressure the hose will be subjected to. It is usually at 25% of the Nominal Design Burst Pressure.

b. Maximum Proof Pressure
This is the maximum test pressure the hose will be subjected to. It is usually at 150% of the Maximum Working Pressure with the hose installed straight.

c. Nominal Design Burst Pressure
This is the pressure point where the hose can be expected to rupture. Based on the minimum annealed tensile strength of the braid wire and corrugated hose alloys at 21…C with the hose installed straight.

d. Shock Pressures
When this occur possibly due to fast closing valves, the peak pressure shall not exceed 50% of the Maximum Working Pressure.

e. Pressure Relative to Unbraided Hose
At Maximum Working Pressure, 1 to 2.5% elastic elongation might take place in unbraided hose assembly. The unbraided hose should be unrestrained at one end or installed in a manner to allow free axial expansion due to pressure. This is to avoid squirm from occurring.

f. Pressure Relative to Braided Hose
Elongation occurs when internal pressure is applied to a corrugated metal hose. To avoid this, a wire braid sheath over the hose is applied. The braid has minimal effects on the bending and flexibility.

g. Pressure Relative to Temperature
For operating temperatures in excess of 21°C, the tabulated pressures must be decreased in accordance with the table below. 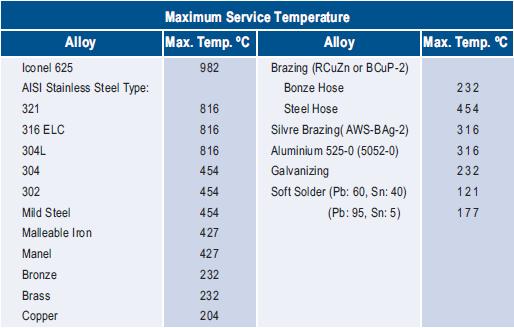 a. Offset Motion
Offset motion is the parallel motion that occurs in a tube with flanges at both ends, while the distance between the flanges remain the same.

c. Axial Motion
Axial motion refers to the dimensional variation of a flexible tube along its longitudinal axis, and displacement is expressed as the amount of extension/contraction.

e. Random Motion
This is the last mode of motion. A good example will be the garden hose. When it is freely handled, it moves randomly

A flexible metal hose may be subjected to repeated flexing or bending. Generally, these are separated into basic categories, vibration, intermittent, continuous and static bend.

a. Vibration
Vibration is shown as the un-shaded area of the chart in the diagram. When the expected combination of double amplitude and frequency falls into the shaded area, consult our engineers.

b. Intermittent Motion
This refers to the motion that occurs on a regular or irregular cyclic basis due to thermal expansion and contraction.

c. Continuous Motion
This refers to the motion that occurs on a regular cyclic basis normally at a slow cyclic rate and constant travel.

d. Static Bend
This refers to the minimum center line bend radius which a flexible metal hose may be bent for installation.

Please note that all these information serves as a general guide only.

When installing hoses, there are 2 basic things to take note of.

a. Use of unions or floating flanges to minimize possible torque damage to flexible tubes.
b. Always install tubes so that flexing takes place in one plane only.

a. Due to improper installation, flexible tube can be subjected to recurring sharp bends, which might result in fatigue and premature failure.

Keyser offers a comprehensive range of flexible hoses. The main advantages of metal hose include high resistance to both high and low temperatures, high strength, high corrosion resistance. They also reduce significantly any vibration or noise. They connects rigid piping which are misaligned to moving parts of machinery and equipment. A variety of choice of metal is available. Such as Bronze, stainless steel, monel and inconel.

Our complete range is widely used for conveying high pressure and temperature, corrosive and non-corrosive liquids, searching gases and dry materials. We are capable to manufacturing a full range from 1/4 to 16 ID.

Interlocked metal hose by helically winding and folding together the edges of specifically pre-formed metal strip. For low-pressure application or where pressure loss is to be held at a minimum, a pre-formed groove inside the interlocked joint is packed with copper/stainless steel wire and asbestos cord.

Used primarily used as valve seals and pressure sensing devices, as well as flow channels for all types of media, Keyser Bellows are formed from lap-or butt-welded stainless steel, monel, inconel, hastelloy or any materials that can be weld.

High grade treated non-metal packing is simultaneously wound with the metal strip and located in a formed groove. This non-metal high temperature packing in fully-locked construction withstands the pressures to conduct safely non-searching media like water, oils etc. Available in sizes from 1through 4 diameters.

Used for handling dangerous hottar, asphalt and oil because of their great strength and dependability, Keyser Tar & Asphalt hose incorporates a special helical winding with an non-metal high temperature packing. These are available in a variety of sizes from 3/4 to 4 ID.

Keyser Vibra Masters are available in annular corrugated stainless/carbon steel or bronze hoses. Noises, together with pump vibration will be absorbed by these Vibra Masters.

A flexible metal casing is used to protect the annular corrugated metal hose when it is subjected to external abuse such as dragging etc. Flex-wound interlocked metal hose provides this additional protection. Other coatings such as synthetics are also available on request. There are 2 methods of protection.

Ribbon Strip Braids
These can be applied where cracks can be easily formed due to fatigue and high movement frequencies.
a. Exceed 3m in length
b. Used for stationary piping

S-Type flexible tubes, made from stainless steel strips, is a helically corrugated tube manufactured by continuously processing the material on a high speed forming machine. It is then annealed in a continuous automatic bright annealing furnace without oxidization to eliminate residual stresses. This is recommended for medium or low pressure application.

A-Type flexible tube, made from stainless steel strip or plate, is an annularly corrugated tube manufactured by continuously processing the material on a high speed forming machine. It is then annealed in continuous automatic bright annealing furnace. Unlike the S-Type, it has annular corrugations, thus it will not twist when subjected to elongation or contraction.

Welding or silver-brazing are methods used to attach the end connectors to corrugated flexible hose.

These flexible hose are suitable for temperatures up to 250° C. 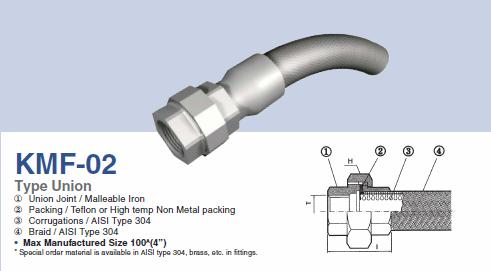 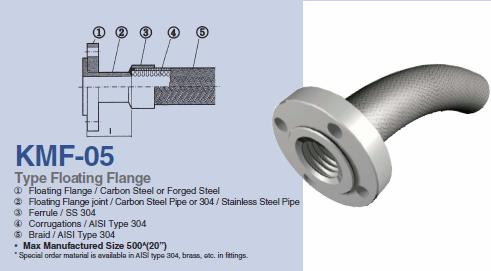 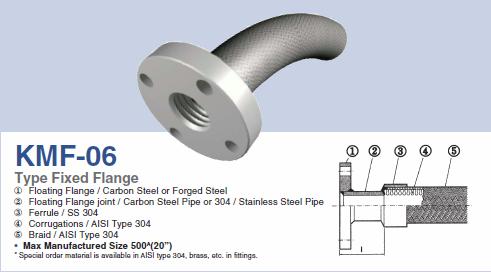 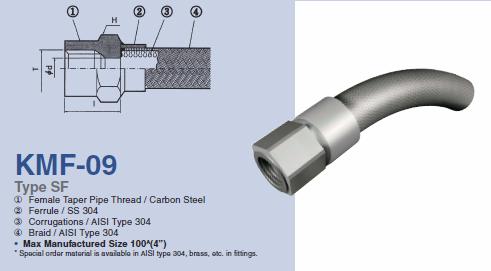 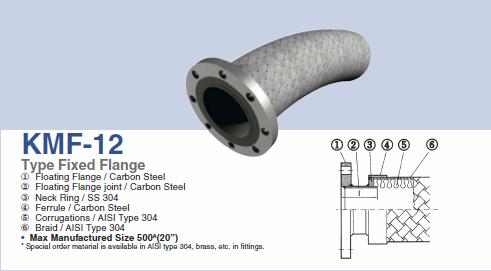 This assembly consists of corrugated stainless steel inner tube and outer one.The jacket area between the inner and outer assemblies contains steam or other heat mediums to heat highly viscous fluid such as heavy oil or asphalt conveyed through inner corrugated tube in order to avoid solidification and clogging.

This assembly consists of corrugated stainless steel outer tube and PTFE inner plain tube. PTFE tube is inserted along the inner surface of outer tube to protect it from chemicals and corrosive gasses. As it has excellent properties in not only corrosion resistance but also sanitation, it can be used to convey foodstuff, it provides you with advantages brought from both stainless steel and PTFE. Also available in convoluted fully lined anti-static.

This Flexible tube is designed for the use of underground piping. It has the protective made of synthetic rubber and so on to protect corrosion caused by soil surrounding it.

The table below serves only as a reference guide in the selection of the most suitable host and fitting material. The listed media, unless otherwise stated, is considered to be pure at room temperature. Any change in the room condition will affect the rating. No attempt has been made to account for variation in service conditions since these variables are too complex. 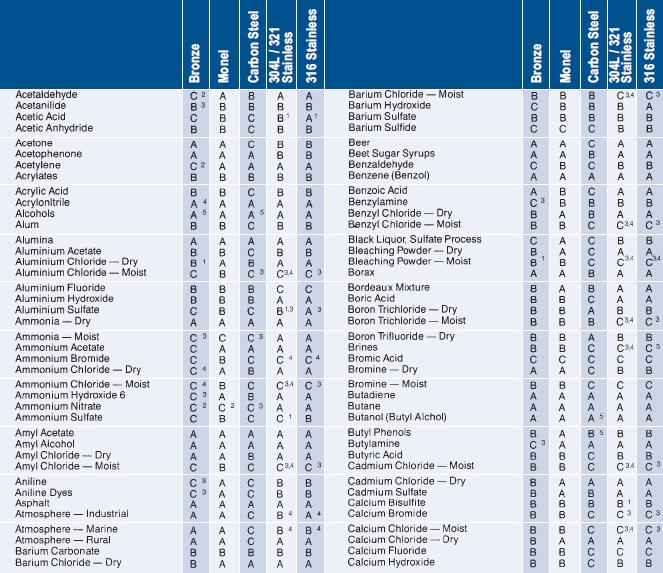 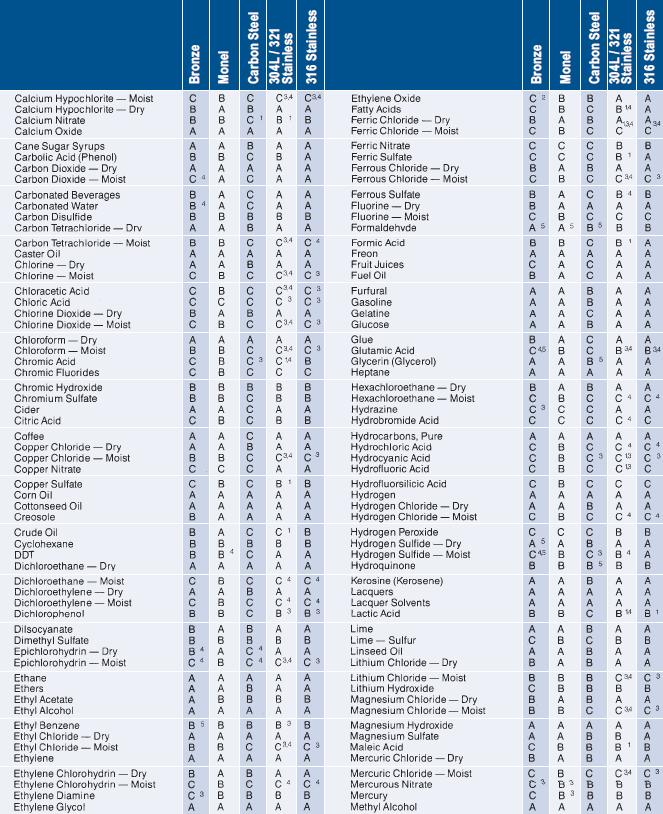 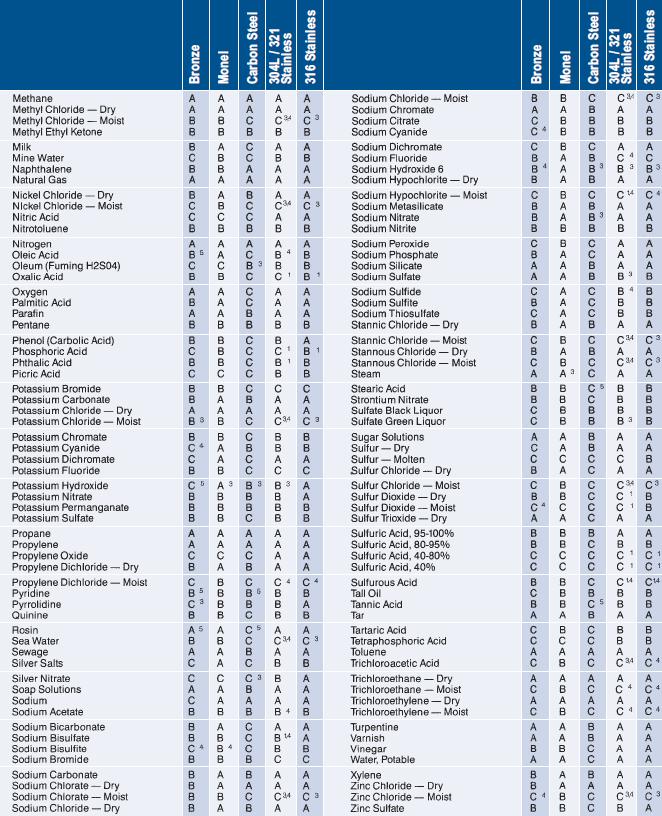